Integral Development of Communities for a World Without Poverty.

On Wednesday,20th of February, we, Amanda and Mai went  to the cattle market in Evbuotubu Community to hold a peer session. 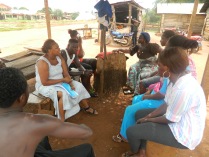 When we arrived at about 1pm there were already about 6 men and 4 women gathered. The  peer educator was already awaiting for us.
Amanda educated the people on the meaning of HIV and the distinction between HIV/AIDS. Moreover the attendants were taught about the causes of HIV, and the symptoms of AIDS. Most importantly the attendants were not only given an understanding of the transmission of the virus but also about how HIV does NOT spread and how to protect themselves . After the session the attendants were free to ask questions.

One of  the peers said he taught HIV virus could be transmitted through hand shake but now he knows better. One of the  peers, Kingsley said with this regular session where they  get enlightened, a society that is HIV  FREE is possible since they now know how to prevent it. From the amount of questions one could tell that the session had made the people think about this issue and the enlightenment was very clear to them.

distribution of uniforms for orphans on the 7th of march 2013