Integral Development of Communities for a World Without Poverty.

As part of our effort to support the development of the Educational sector and encourage reading and creative writing, Action For Community Development organized an essay competition with the title Re-Inventing Nigeria Democracy: Imperative on the way forward on the November 19th 2013 Time 12pm.

10 Schools were selected and invited for the competition. The following were the list of schools invited in Benin City ,Edo State -Nigeria.

7 Word of faith Group of Schools.

The competition was opened to students from J.S 3-SS 3 with each school being represented by two students each. Prizes to be won ranges from a computer for the first place winner, school bags and books, Sandals and other consolation prizes.The competition took place at Greater Grace School in Evbotubu Benin City. 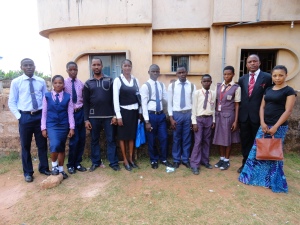 distribution of uniforms for orphans on the 7th of march 2013